Taking a step to forgive another is not easy, and all the more when it is a parent, a parent who has done the unthinkable. After a considerable amount of prayer, and all the strength I could muster, I called my father, and he agreed to see me. There had been a number of years of no communication. When he agreed to see me, I had thought, hoped that he would apologize for what he had done. But, there was no apology, and sadly, there was not a lasting reconciliation.

Reconciliation is not the point of forgiveness, nor is an apology. Forgiveness must come from our heart, with no strings attached. We are to live in a state of forgiveness, as Christ said, seventy times seven. It doesn’t mean that we are to become a doormat, allowing another to hurt us time and time again. We forgive, and we move on.

What I had hoped for did not happen, but something even greater did. It was because I took the step to forgive my father that I met my husband. Prior to moving back to Chicago, I had rented an apartment, expecting to move in once I arrived. Little did I know that the owner had sold the building and left with my deposit. I had no where to live. For the time being, I stayed with my mother. I told my father that I was looking for an apartment. He told me that he had met a man who owned rental property, was quite fair with the rent, and a very honest person. A phone call was made, and as it turned out, a apartment would be available in just a few weeks. I moved in, and two years later, this man became my husband.

After I stepped forward to forgive my father, it ultimately felt like a very dark period of my life. I had hoped for a relationship with my father, it didn’t happen. I lost a place to live as well as my money. I had tried to do the right thing.

And we know that all things work together for good to them who love the Lord.

Had I not taken the step to forgive my father, had I not lost my apartment, I never would have met my husband. I took a step, and God took it from there. ALL THINGS do work together for good to them who love the Lord.

In her book, The Hiding Place, Corrie ten Boom shares a story about when she and her sister first entered the barracks at the concentration camp. Corrie felt something bite her, and to her horror, she saw that the barracks were swarming with fleas. Her sister promptly began to thank God that she and her sister were able to remain together, and then went on to thank God for the fleas. Corrie could not believe that her sister would actually thank God for the fleas. Her sister turned to her and quoted the scripture from Romans, and told her sister that even the fleas were of God’s creation and that yes, they should be grateful. Corrie shook her head and just couldn’t come to grips with the idea that fleas could be a blessing, and could only see them as a curse.

When Corrie and her sister entered the German concentration camp, Ravensbruck, she was miraculously able to smuggle in a New Testament. At night, the New Testament became a gift to all who shared the barrack. The ladies would gather around as Corrie read the scripture. In time, Corrie observed that the guards never came into their barrack and they were free to read and pray. Why, she wondered? What finally came to light was that the guards were afraid of the fleas, and it was then that she realized that yes, her sister had been right, give thanks, even for the fleas.

There are times in our lives when we can’t possibly believe that God has a blessing in store when we face horrific situations, causing us to wonder if God is even there.

Let us keep looking to Jesus. Our faith comes from Him and He is the One Who makes it perfect. He did not give up when He had to suffer shame and die on a cross. He knew of the joy that would be His later. Now He is sitting at the right side of God.

In my upcoming posts, I will share some of my experiences of when all seemed lost, when God made a way when I thought there was none.

I was 15 years old when my father left. While a divorce is devastating to all families, mine seemed all the worse, my father was a minister. I just could not understand how someone who preached what he had preached, could do all that he had done.

After my father was gone, I would overhear people at church whisper about the fact that my brother and I were now from a broken family…”what will become of them?” We were labeled, and it seemed all felt that we no longer had a future, we were doomed. We had not changed, and what had changed was something we had no control over.

Before the divorce was final, our family friend, Tommy Woo, whom I spoke about in my last post, and his wife flew to Chicago to try and talk to my father. I’ll never forget the look of heartbreak on Tommy’s face that night as he told us about the day. He and my father had been so close, he thought for sure that he would at least talk to him. When Tommy arrived at my father’s office, my father promptly got on the elevator. Tommy and his wife followed. They rode together to the 1st floor. The doors opened,  and my father walked away without saying a word.

It’s difficult to have faith when your world seems to crash in on top of you. In moments like these, and those that are even worse, it’s tempting to ask, “where is God?” I wondered about what would become of me and I also wondered if anyone knew or even cared about how much I was suffering.

“What is the cost of 5 sparrows, two copper coins? Yet God does not forget a single one of them. The very hairs of your head are all numbered. So don’t be afraid; you are more valuable to God than a whole flock of sparrows.”

Both verses gave me hope, hope that somehow I would be taken care of. Yes, I suffered, and there was more suffering to come. But, God does not fail to follow through on his promises and to bless those who have suffered.

This is a 2-part story, come back next week to hear about the blessing 🙂 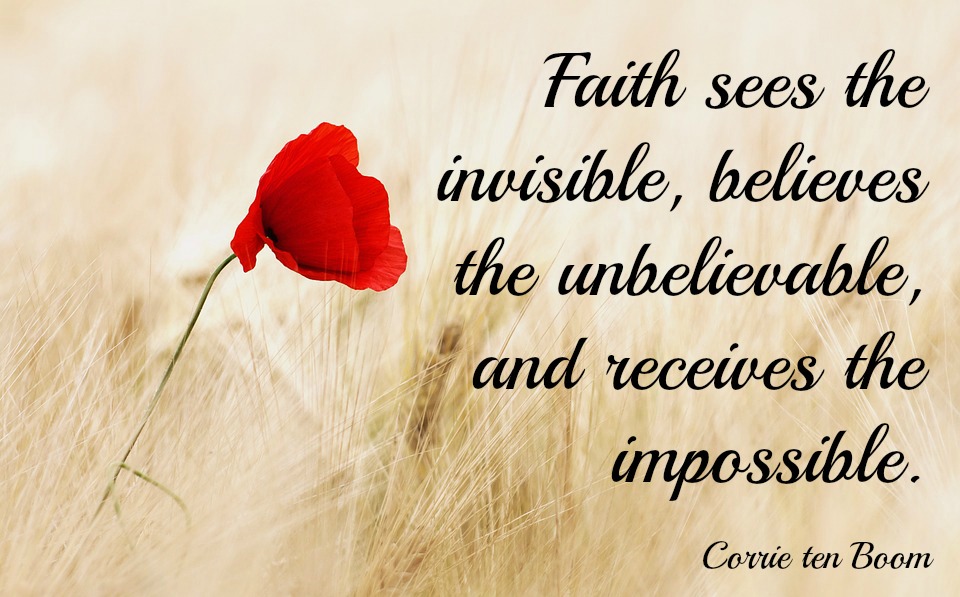 Tommy Woo entered my life when I was only 4 years old. He was a Chinese man with a North Carolina accent, a heart of gold, and Goliath sized faith. As he began to grow old, and his health began to fail, he and I grew very close. I loved visiting with him and hearing about his days as a missionary.

It was during one of our visits that he told me that God had given him a promise. His eyes twinkled as he shared…

Tommy shook his head and told me that he really didn’t know how this would happen. He said, “my child has children, but my children don’t have children, and there are no prospects of any of the others having children any time soon.” He and his wife had a total of 5 children. By this point in his life, his health had diminished considerably. He said, “I don’t know how long I have at this point, but I believe that God gave me a promise, and I will see my children’s children.”

That Christmas, a photograph was taken of 3 of his daughter-in-laws sitting on a sofa. Little did they know that it would be a prophetic photograph. Each of them became pregnant shortly thereafter, and none knew at that time of the promise their father-in-law carried in his heart.

Shortly before the following Christmas, Tommy breathed his last breath, but before he did, his promise had been fulfilled, he saw his children’s children.

It is with love that I begin this new journey. I hope that you will join me as I share stories of my life, and stories of those whom I have loved, and those who have shown me the true meaning of faith.

Each week I will share a story that I hope will encourage, inspire, and enrich your life. I hope that you will find a little time to join me on Sunday evening.

Thanks for joining me!